The RLI Board, in their first meeting of the 2011-12 Board on July 29, 2011 in Springfield VA, selected their Board officers for this year.

2010-11 Board Vice-Chair PDG Sandra Duckworth of Stafford VA was unanimously voted Chair of the Institute. A retired fundraiser and lobbyist, she is a Member of the District 7610 Paul Harris Society, Benefactor, and Major Donor of The Rotary Foundation. She was an original Faculty member of the Institute and has been a leader on the Promotions Committee.

Founding Board Member PDG Sue Poss of Greenville SC returned to the Board and was unanimously named Board Vice-Chair. The owner of Image Plus Communications, she is a Member of the District 7750 Paul Harris Society, The Bequest Society, and Major Donor of The Rotary Foundation. She has been awarded the RI Service Above Self Award, an individual Rotarian's highest award for service from Rotary International, and the Rotary Foundation Citation for Meritorious Service. She was the original South Carolina representative to the Board, served as South Carolina State Chair, and was a past Vice-Chair of the Institute.


PDG Bill Wilson of Statesville NC was unanimously named Board Secretary.  The retired owner of a building construction company, he is a Member of the District 7680 Paul Harris Society, The Bequest Society, a Major Donor of The Rotary Foundation and a member of the Arch Klumph Society. He was named club Rotarian of the Year by the Greater Statesville Rotary Club in 2003. He has served as RLI District Chair, Carolina's West Regional Coordinator, and as Database Coordinator for the Institute. This is his third year on the Board.

The Board discussed numerous other appointments for RLI positions, and an exhaustive list of those named are set forth under the "Our Leadership" Tab of this website.
Posted by Bevin Wall at 5:45 PM No comments:

Cora Huitt is immediate Past President of the Bon Air VA Rotary Club and is President of Women's Health Physical Therapy. She is a RLI Graduate, a Rotary Foundation Alumni, Germany Friendship Exchange participant, and member of the District 7600 Paul Harris Society & Benefactor of The Rotary Foundation. She is a recipient of her club's Meritorious Service Award.

Ed Robertson is Past President of the Burke VA Rotary Club and is a Deputy Manager at Computer Sciences Corporation. He is an RLI Graduate, a Rotary Foundation Alumni, and member of the District 7610 Paul Harris Society.

The new Faculty members were trained and installed by RLI Faculty Trainer Pam Wall before the assembled Faculty, and were welcomed by RLI Chair Sandra Duckworth and RLI Executive Director Bevin Wall.
Posted by Bevin Wall at 5:20 PM No comments:

On the Faculty Page at rlinews.blogspot.com, there is a link to a new interactive resource The RLI Faculty Website for Facilitation Techniques located at http://www.rlifaculty.blogspot.com is an international resource available for all faculty to share their ideas and creative approaches to the RLI sessions and materials.

In tech terms it is a "Wiki". The site features a page for each course. Faculty members can write on each page having it immediately visible to others and present on the web. We encourage all RLI faculty to contribute, as the more entries, the more valuable it will be to us as a learning tool.

Go to the site now.
Posted by Bevin Wall at 1:45 PM No comments: 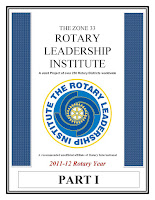 This week, the 2011-12 RLI Materials for Parts I, II & III were posted online on the Course Materials Page at the Zone 33 RLI website. The materials can be viewed in Google Docs and downloaded and printed in pdf format.

Also on that page are a link to the Resources available for each section at RLIFiles.com, as well as copies of all of the new of updated resources separately linked.
Posted by Bevin Wall at 1:39 PM No comments: 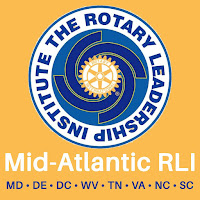